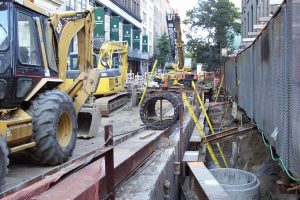 Most people notice underground utility construction because of the traffic problems they may cause. However, if you are familiar with geotechnical or geostructural construction, you may have noticed poor or inconsistent risk management practices in the underground utility construction sector. Utility construction is not subject to the same type of codes and standards as buildings or transportation structures. Instead, the work may be governed primarily by the utility owner’s standards. Since the sophistication of utility owners can vary widely between a small-town water department and a major operator like ConEd or DC Water, the agency standards may vary widely from one owner to the next.

Poor subsurface risk management can result in hazards to adjacent buildings and other infrastructure. Two recent investigations from the files of Richard J. Driscoll, Consulting Engineer are examples of the risks presented by underground utility construction. The first project involved municipal sewer reconstruction in a small New England city. Mechanical rock excavation subjected the occupants of a wood-frame structure to disturbing vibration levels. In addition, the occupants noted evidence that accessory structures moved and a utility service connection broke during construction. The second project occurred in a large mid-Atlantic city. A number of minor conditions appeared to coincide with nearby gas line work and the occupants reported perceptible to disturbing levels of vibrations over several months. Both projects were designed by consulting engineering firms retained by the utility owners and executed by contractors.

The complaints in both cases appeared to arise primarily from the means and methods selected by the contractors for each project. In the first case, there was evidence the contractor did not properly use excavation support. Rock was encountered where it was likely not anticipated. This seems to have led the contractor to enlarge the excavation to allow rock removal, leaving the sides unsupported. Similar “open hole” approaches may have been taken for deeper manhole structures. Meanwhile, mechanical rock excavation exposed nearby structures and perhaps unsupported excavations to significant levels of vibration. In the second case, the manner in which the excavation was covered at night and restored was believed to produce relatively modest vibration levels, but over a long duration such that minor distress accumulated.

The choice of means and methods stem from the planning and bidding of the work. Utility contract drawings tend to be somewhat conceptual. Subsurface explorations are often sparse or nonexistent. Existing utilities are sometimes not where they were recorded to be or unknown utilities, active or abandoned might be present. This produces considerable uncertainty as to the conditions the contractor will face and leave a lot to be worked out in the field. The need to react to unknown subsurface conditions and stay on schedule and on budget probably leads utility contractors to be more cavalier about means and methods than contractors in other sectors. However, utility work can require non-trivial engineering to protect people and property during construction.

Interestingly, the two investigations and experience with other utility projects lead to a few common conclusions with respect to protecting adjacent property during underground utility construction. First, some utility owners and their consultants employ an early twentieth-century approach to risk allocation during the design phase. Ostensibly to reduce cost, they perform minimal investigations of existing conditions, develop sparing, ambiguous and generic construction documents and then require the contractor to buy the subsurface risk. Under this approach to procurement, contractors are incentivized to inflate bids, aggressively pursue change orders and take big risks if things go poorly.

Second, while most utility contractors seem to understand the importance of shoring trenches, awareness of the need to support slopes of wider excavation is less common. This is likely a result of cost-aversion and ignorance on the part of multiple project stakeholders. Failing to properly support vertical or steeply cut excavations sides, especially in deeper excavations and near structures and infrastructure can lead to injuries and property damage. Foregoing excavation support entirely can be catastrophic. Even when trench shores are used in over-sized excavations, the sides of the excavation can move laterally, damaging pavements, existing utilities and structures within the zone of influence of the excavation.

Third, again likely for cost reasons, pre-construction condition surveys and monitoring, appear to be rarely used in routine underground utility construction. This misses an opportunity to control risks by identifying problems early before the consequences fully manifest. If seismograph data shows an operation exceeding threshold vibrations levels or a crack appears that was not observed during the pre-construction survey, the operation can be modified before more serious damage occurs. In addition, pre-construction surveys and monitoring data provide a crucial factual basis for evaluating claims. Without such a basis, too much uncertainty may exist to resolve the dispute. This can lead to protracted litigation to the detriment of both sides.