What is Geostructural Engineering? 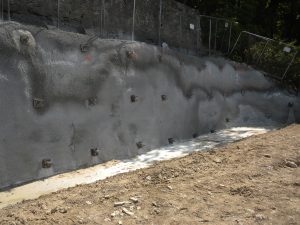 “Geostrucutral engineering” is a term that has become increasingly common in the specialty foundation construction community in the past 10 to 15 years. Like too many terms in architecture, engineering and construction, it does not appear to have a consensus definition and may describe different things in different contexts.

If you search for geostructural engineering on the internet you would likely find marketing of particular collections of engineering services or perhaps an internal practice within a large multi-discipline firm. Some firms use “geostructural engineering” to mean geotechnical design, especially when advanced analytical tools are used. This appears to be a response to the use of “geotechnical engineering” to mean soil sampling and testing for engineering purposes without design services or even input into the design of a project. Other firms market services to construction contractors, including design and instrumentation and monitoring as “geostructural”.

Neither usage provides a clear meaning to the moniker, which leaves a lot of ambiguity as to what comprises the practice of geostructural engineering, how it is different from its parent geotechnical and structural disciplines, or other specialties therein, and the qualifications and body of knowledge required for geostructural engineers.

A more useful definition of geostructural engineering can be had by asking what is a geostructure? Geostructures can be thought of as a collection of structural elements that intentionally mobilize the strength and stiffness of soil to resist loads. As such, geostructures are soil-structure interaction problems. This definition provides clear differentiation with conventional structures, including structures subjected to soil loads that do not utilize the soil’s strength. In addition, since geostructures contain structural components, they are different from earthworks, which rely on soil strength alone for stability.

The most trivial example of a geostructure is a spread footing. In practice, the response to load of the ground below the footing is typically reduced to a single parameter, the bearing capacity. This is a purely structural conceptualization of a footing. In reality, the soil compresses and mobilizes its shear strength while the footing bends and shears. The deformation of the footing and soil results in a distribution of load that varies according to their respective geometries and properties. The behavior is more complex than is suggested by a single constant.

Similarly, earth-retaining structures are geostructures that can be approached as a purely structural system or as a more complex soil-structure amalgam. Some earth-retaining structures, like basement walls and walls of rectangular vaults and tunnels, are braced at the top and bottom and may rigidly resist soil pressure as a purely structural element without utilizing the soil strength. But if a retaining structure is allowed to move slightly the shear strength of the soil will be mobilized and the pressure on the wall relieved significantly. If the structure is embedded in the soil, lateral movement will mobilize the strength in front of the wall developing additional resistance and further reducing the demand on the structural elements. Conventional gravity walls and flexible retaining systems often used for temporary excavation support rely on this behavior.

Elements that resist structural loads by transferring them to soil or rock via friction or bond stress are the clearest examples of geostructures. Soil and rock anchors, as well as small-diameter piles, use this mechanism. These elements are sometimes used to support flexible earth-retention, utilizing both the strength of retained soil and anchorage to the soil outside the area disturbed by the retaining structure. Tied-back sheet pile and soldier walls and soil nail walls exploit this approach.

It is the importance of structural design, including the thought processes and philosophy of structural design that is often missing from geostructural engineering. Consideration of structural stability, serviceability, redundancy and ductility of failure applies to the performance and safety of geostructures. Given the numerous potential failure modes, the framework of limit state design is useful.

Geostructures often have nontrivial structural connections and details; improper connection design and detailing have contributed to some catastrophic failures, such as these excavation support collapse in Singapore and Washington, DC. Preventing these sorts of failures requires a relatively advanced understanding of structural behavior, including concepts like pre-loading and buckling.